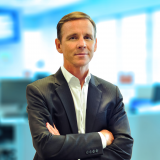 Steve Harris Managing Director, ANZ Global Services and Operations (Manila), Inc. Steve is the current Managing Director of ANZ Global Services & Operations (Manila) Inc. In this role, Steve is responsible for leading the ANZ Manila Service Centre from a strategic and operational perspective. The role is accountable for running and building more value to the operations which include complex banking operations, Risk, Finance, HR Shared Services, Technology Services and a large Customer Contact Centre that provide 24/7 services to 32 markets across the ANZ network. The service centre currently has just under 3,000 employees and has been focussed on bringing agile ways of working and process design to life in order to drive incremental value to customers which includes the introduction of robotics and automation. Prior to this, Steve was the Managing Director of the Chengdu Service Centre in the Sichuan Province in China, running similar services with a heavy focus on Chinese speaking operations. Steve joined ANZ in October 2007. Prior to this, Steve was CFO for TRUenergy’s retail division between 2001 and 2007. Steve has had a long career predominantly in the energy and banking sectors both in Australia and the UK which includes various roles in finance and retail at British Gas, Bank of Melbourne and Challenge Bank. Steve holds a Bachelor Degree in Accounting with Honours from Birmingham University and has attended Executive Leadership development courses at the Melbourne Business School, Duke University and M.I.T (Aug 2016). He also held the positions of Vice Chairman and Chairman of Auscham West China for 3 years and been involved in multiple activities with the Departments of Trade and Foreign Affairs representing both ANZ and Australia. Personal Steve is married to Lisa with 3 children. He enjoys cycling, outdoor activities and continues to study Chinese.

Check out the incredible speaker line-up to see who will be joining Steve.