The Moreira chronicles: Bangemann and Zabel on scope, offshoring and automation [Part 6]

Over the past year, Pedro Moreira has written a series of columns for SSON summarizing his experience in rolling out an enterprise SSO model to a subsidiary, emphasizing the pros and cons of this approach.

Following the conclusion of this series, Pedro interviewed two well-known practitioners – Tom Bangemann of the Hackett Group and Kai Zabel of Heraeus Group, both highly respected practitioners in the field of Shared Services, with decades of implementation experience. Over the next two months, we are sharing a transcript of these interviews right here, covering the role of the SSO, its evolution and future trends; implementations and operations; and a discussion around GBS and new robotic technology.

Kai Zabel: I think size does not matter too much in this case, it’s more a question of the number of locations and how broad the spread is. Definitely, it becomes easier the bigger you are, to demonstrate a good business case. But I believe this is also a model that is valid for mid-size companies, if it fits the strategy of the company and there is a certain geographical spread. If it is just located in just one place, you wouldn’t consider shared services too much. If you have a certain geographical spread and a certain complexity though, I think shared services works.

Often, in particular with very small entities, e.g.  sales offices, what they do with their accounting or their transactional work is they outsource it. That’s my experience, at least. And if outsourcing works, shared services normally works as well.

Tom Bangemann: It works for large, for medium and increasingly also for small companies. Basically it works for anybody. There are obviously limitations, but because of technology developments, for example Cloud, things are more scalable, and therefore we get better benefits even on smaller volumes.

We see a lot of centers being set up with around 30 to 50 FTEs, which is not very big. Companies with $1bn can manage easily, but companies with $300m also have sufficient volume. Remember that you can do multifunctional, so you might have 10 Finance, 10 HR, 5 Procurement and 5 IT helpdesk people in the room. If it gets too small, as Kai said, you just change the sourcing mix but the model is still going to run.

I’d say it’s applicable to basically anybody. The question is then: “What kind of sourcing do I run?”

KZ: Smaller entities might need to include more of their organization in scope in order to avoid the migration of ‘x’ percent of one person.

TB: Interestingly, most of the smaller and medium-companies immediately start with a multifunctional scope based on all that we said and therefore they don’t even have to go through all this discussion of “does every function run their own center or do we put it together?”, because they can’t. It’s either we all go or we don’t. In a way it’s a benefit to them, not to be able to afford this debate, and therefore move directly into the multifunctional GBS environment. Also, they can’t select more locations than absolutely necessary because otherwise they split their FTE’s over too many locations.

So I’d say, small to medium organizations automatically come up with a sort of best practice solution, because nothing else works.

TB: You mean offshoring development vs technology development taking things back? There are different ways to answer that. One is, you can look at all the work that exists and that you could potentially offshore, see where you are in the process and just calculate how much is left, even theoretically. If you do that, even theoretically, then out of originally about 8,000,000 jobs across all western companies, in support functions, you’re left with 1,000,000. The rest is transferable, has already moved or is already automated. So we’re left with this 1,000,000. It is still very significant and at current speeds it still takes about 8 years for this process to finish.

There is still a lot of offshoring going on, because 1,000,000 jobs moving into these countries is a lot of work, but it’s moving to the next stage in the next 5 to 10 years. After that, at some point in time, we’ll be done with offshore. The only thing you can then do is you can move further; you can move from Poland to India to get additional 20% to 30%. That’s not going to happen in most cases, except for if it is within your company’s GBS set-up. If you have a center in Poland and if you have a center in India, you will be moving within those, but if I tell a company with a center in Poland that I have a business case to move to India, rarely are they going to do it for an additional 20%.

Offshoring is going to end at some point, but there are still big movements going on. Technology’s impact doesn’t cause things to move too much as most of the robotics automation implementations we see are being done within the existing service models. So, if I have a center in Germany, I put robotics in my center in Germany. If I have a center in Poland, I put it into my center there. I am optimizing the process and I’m not concerned about where it is.

The model and the location selection does not change too much currently, based on this technology impact. It could change in the future if this gets bigger. It could be that business cases are decided differently in the future but so far I haven’t seen anything in terms of major changes in location selection or decisions on how to place activities.

TB: That was a broad average, obviously you have very different automation levels in different processes and different companies, but we are still at the level where most actually is not automated. In transactional finance you could have a higher level, you could be at 50%, 60% or 70%. Across all levels, you still have a lot of potential to automate more, otherwise we wouldn’t have all these millions of people doing the work. We’ve got almost 5,000,000 people sitting in shared service centers and we’ve got this 1,000,000 still left that can move, so we’ve got quite a lot of work still being done manually.

TB: I would also doubt that these 5,000,000 jobs will completely disappear in the next ten years. I think what always happens is that you eliminate a certain type of activity because of technology advancement, but at the same time you generate one or two new activities. They might be completely different because they have to do with programming development or they might be something in a neighboring area, so you move out of your existing activity into a slightly different activity.

I don’t think we’re going to move into a situation where we don’t need these people, but they’re going to do different things and these tasks are going to be changing quicker than before and that will also hit the world of shared services and GBS. So we just need to be more agile, more flexible, at least for the foreseeable future. Maybe it’ll end someday. I don’t think it can go faster and faster forever, because at some point we’re not going to be able to cope with that, but for the foreseeable future it’s going to move in that direction at an increasing speed. I agree with your estimates; people are not going to all be eliminated for some years.

KZ: These are different things. At least, in finance and accounting we see that the international rules of how to do accounting are becoming even more complex, which makes automation a bit more difficult or significantly more difficult. I think these trends of getting more transparency and more regulation happen at the same time. It might be a trend which goes against the level of automation.

Second, I have no idea if we really continue on the path which we saw in the past where more and more things are harmonized on a global scale or an international scale or that this trend is coming to an end. Or whether things would happen on a national level, which is big politics that I can’t judge on. I think the next ten years are not as foreseeable as these studies lead us to believe. But it will definitely impact our work significantly in the next years. So, from that point of view, flexibility is definitely required, but I think in directions that we do not even know of yet.

TB: I would agree. I think the only thing we know is that we really don’t know much. Flexibility or agility is the only thing we can really do to prepare, otherwise we can maybe look forward one year or so. But I would agree, Kai, if we take your example, break it down and make a simplistic picture. If you used to have 1 person working on the accounting rules and 1 person on the accounting systems and 8 people keying something in, I think in the future the ratio may be completely different. So, instead of having 10, we’ll have 8, but not 0. Maybe out of these 8, 4 are programming, 3 are looking at the rules, 1 is doing instruction handling and the rest is done by robots – so a completely different mix. There is still something happening there but people are moved from keying to either higher level jobs in understanding the rules and translating them into technology or programming; or exception handling; or overseeing the robots that do the job … something in those terms. There’s still going to be something there, but it’s not exactly the job that is there today.

KZ:  We are currently building a future, building the foundation, in order to drive more automation, to drive more standardization, moving into one system, getting more transparency, getting more controls on the process. That’s where all our effort is currently going and from that point of view, I strongly believe that the type of work we are doing and the way we are doing our work is going to change. It will become more automated.

Even though we currently don’t see it, the foundations are built, the houses are not yet there in our case, but you get an idea of what the foundation is capable of carrying. 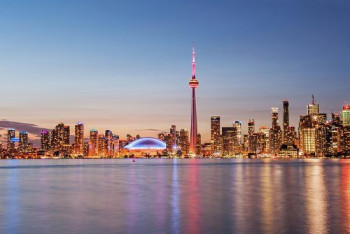 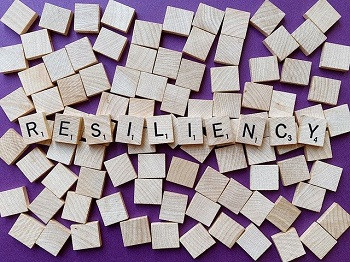 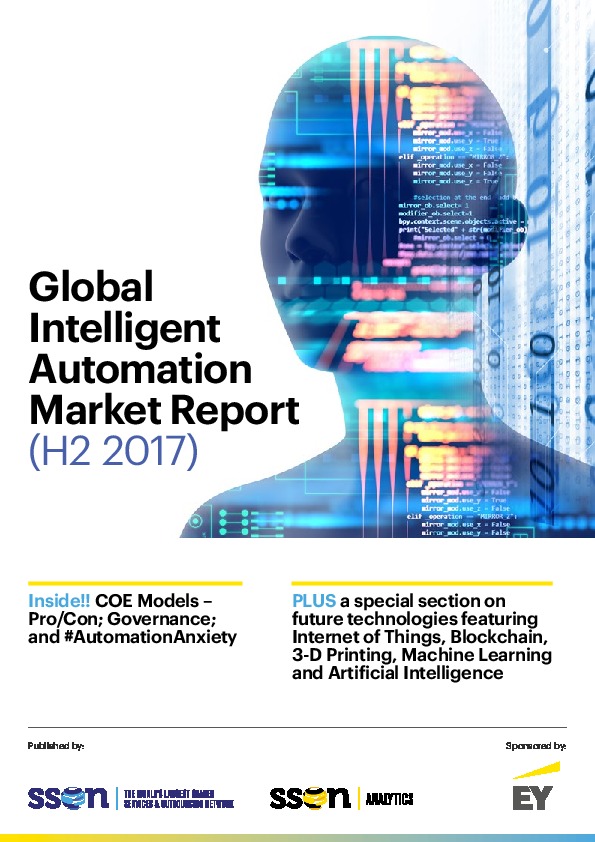 Banking on AI: The impact of artificial intelligence on finance industry
2017-10-06
By AiiA Editor 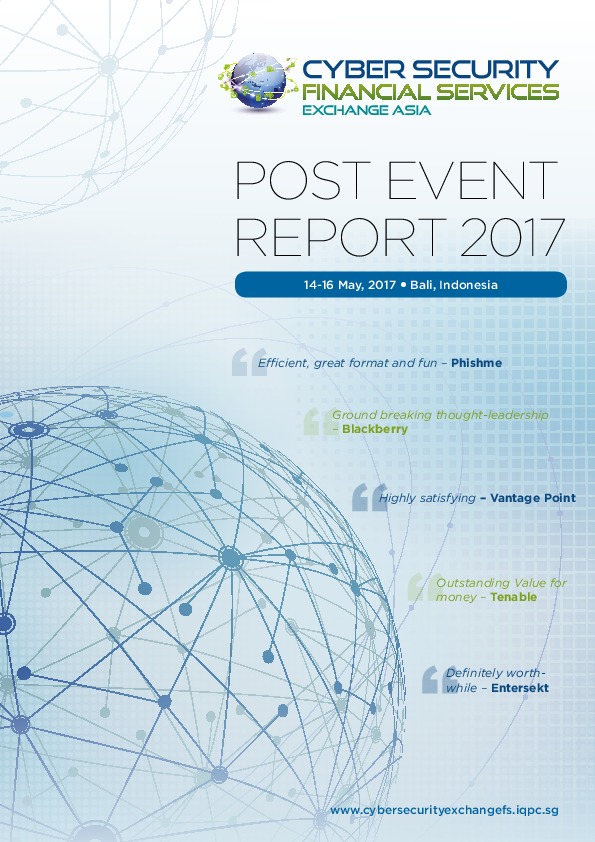 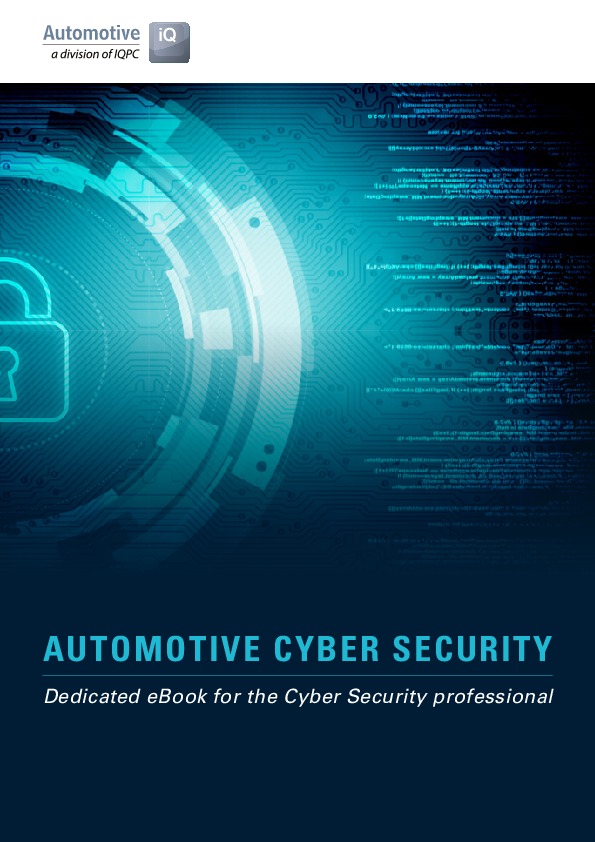 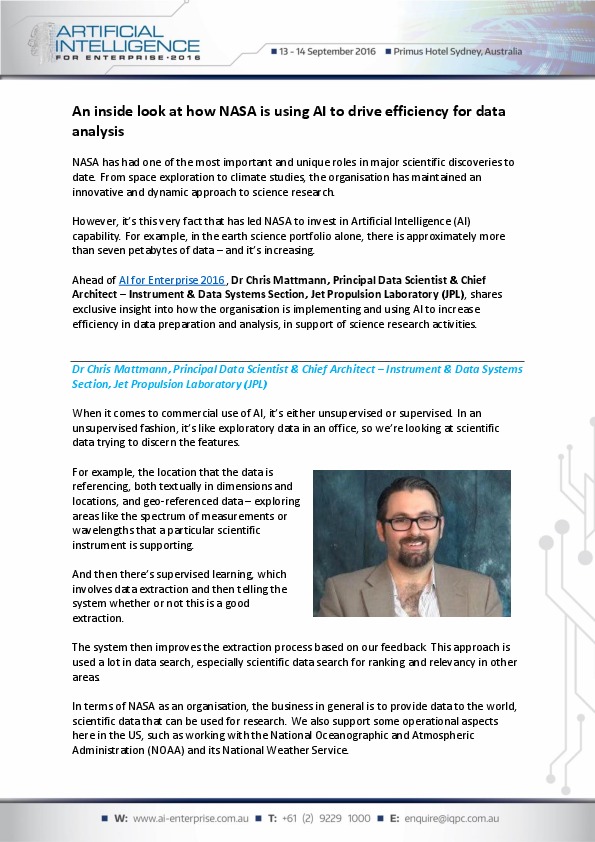 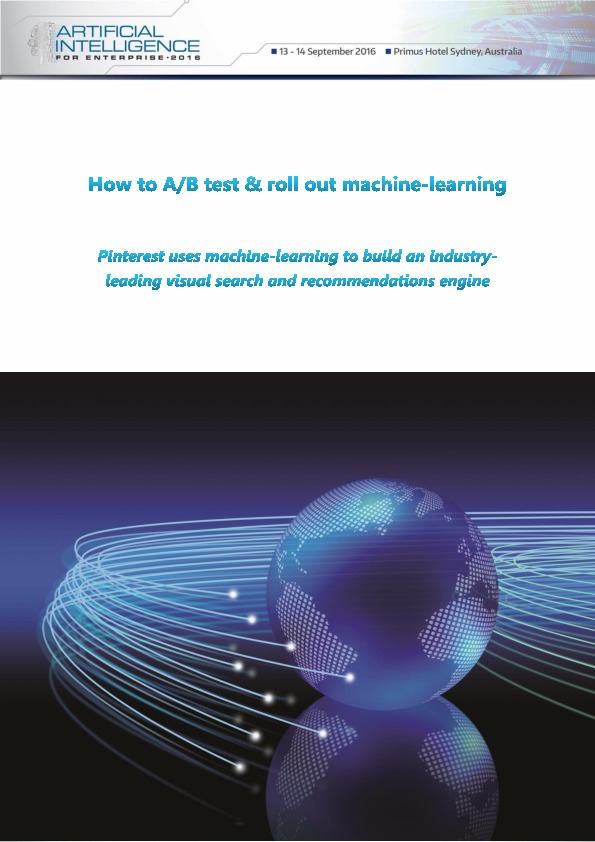 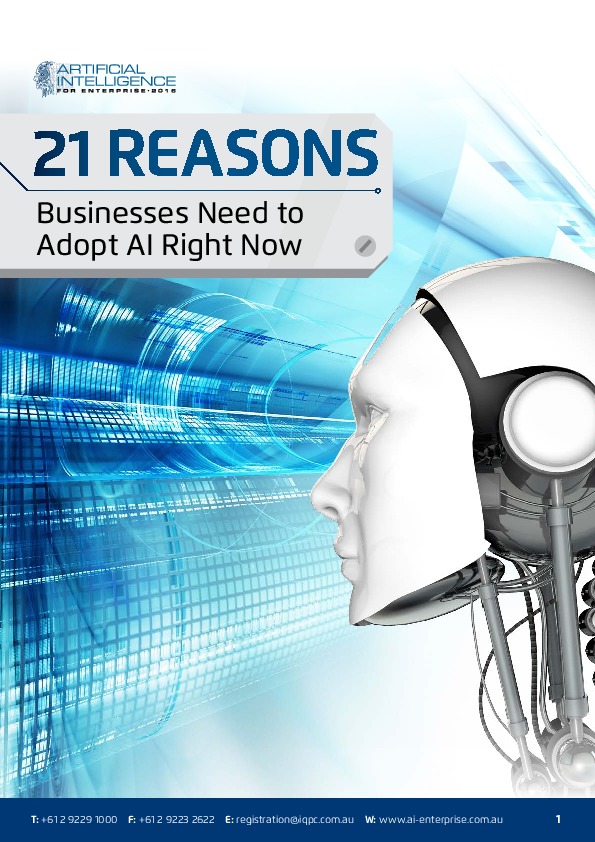 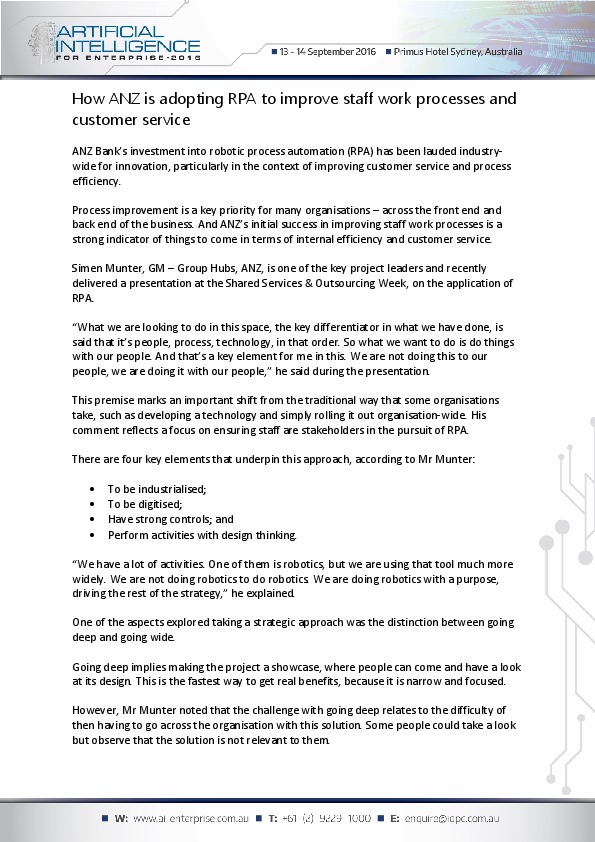 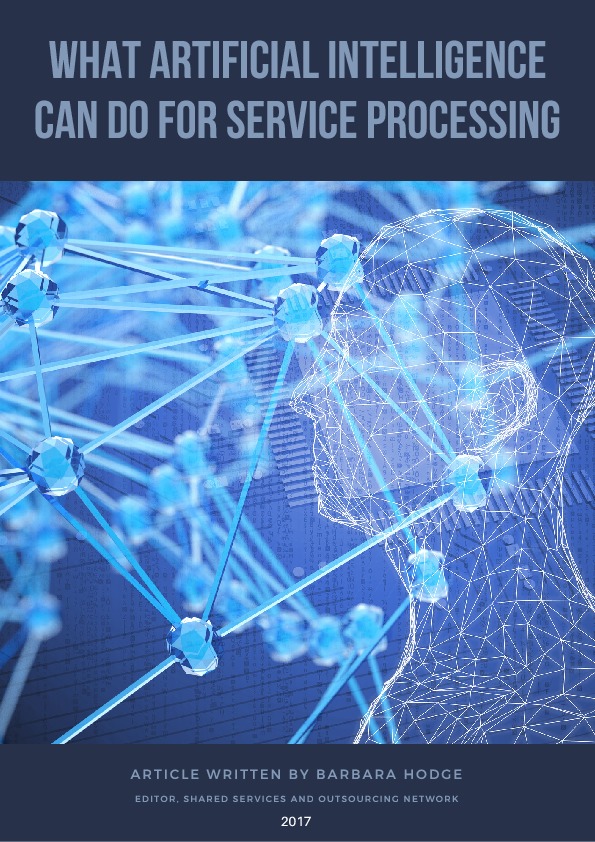 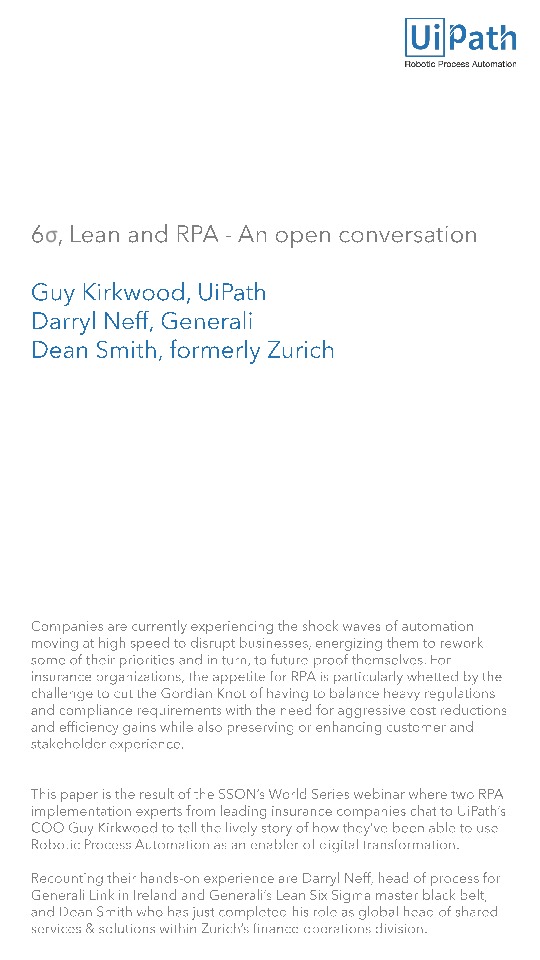